Students collect over 900 tonnes of recycling through RecycleLeague!

The RecycleLeague competition has engaged over 39,000 students across 10 universities, and the University of Worcester has been named as recycling champions, winning £15,000 to invest in sustainability initiatives! 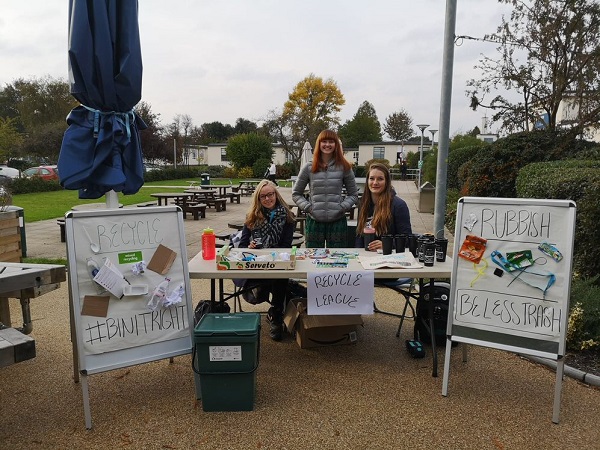 Students across eleven universities in the UK have saved 922 tonnes of recycling from landfill as part of an initiative to boost recycling rates through innovative recycling activities across university campuses in the UK.

Launched in Recycling Week in September 2019, each institution was given £1,800 in funding to rally students and staff through various campaigns with the chance to secure £15,000 to invest in future recycling initiatives. To access the grant, each university submitted an application highlighting how they would spend the funds, from zero waste Christmas markets to upcycling tie dye events. The RecycleLeague competition was run by SOS UK on behalf of NUS (National Union of Students) and funded by Coca-Cola.

The University of Worcester was named the winning institution, seeing the biggest uptick in its recycling rates by 28% against its baseline for the previous year. Some of the recycling activities across the country included a Thames littler-picking event, DIY soap making, cooking workshops to highlight exciting ways of reducing food waste, fast-fashion workshops teaching people the benefits of upcycling, and recycling-themed quizzes on social media to educate people about recycling, with the various campaigns engaging more than 39,000 people. The University of Worcester focused its activities in its St John’s campus halls of residence. The on-campus campaign was designed by second year Digital Creative Media students and involved a video and a ‘bin poll’ game. Students visited flats around the campus and talked to the occupants about recycling and ensured they had an accurate poster explaining what materials went in which bin.

Katy Boom, Director of Sustainability at University of Worcester, said: “Students and staff were really committed to boosting recycling efforts and are passionate about continuing its legacy moving forward. The activities the students undertook, particularly giving more information, proved really effective. Thanks to the prize money from Coca-Cola, we’re planning to run workshops with local community groups in Worcester, and we’ll be working with a local social landlord and the city council to run a similar competition for local people.”

Ross Renton, Pro Vice Chancellor at the University of Worcester, said: “We’re thrilled that the efforts our students and staff are making towards a more sustainable society have been recognised in this way.  This builds further on the University’s growing reputation for sustainability, which has seen us consistently among the top most sustainable universities in the People and Planet University League for over a decade, and the winner of the 2019 Green Gown Awards’ Sustainability Institution of the Year.”

Zamzam Ibrahim, NUS National President and founding trustee of SOS-UK, said: “The 2019 RecycleLeague saw a significant increase in recycling across UK universities thanks to the development of some innovative and engaging approaches to recycling. If all 140 UK universities were to take part in RecycleLeague, then we could increase the amount of recycling by 994 tonnes compared to normal, which could reach 3,000 tonnes across a 12-month period if activity was sustained throughout the year.”

Gordon McSkimming, Sustainable Packaging Manager at Coca-Cola European Partners (CCEP), said: “It’s inspiring to see so many young people looking into new ways to influence behaviour and attitudes when it comes to recycling. This is something we’re passionate about at CCEP too – we’re committed to reducing our environmental impact. All of our cans and bottles are already recyclable and by June 2020, we’re doubling the amount of recycled material to 50% in all plastic bottles. We recognise our responsibility in helping other institutions and communities play their part to make a widespread impact – no matter how big or small. The results from the 2019 competition and efforts from NUS and the universities who took part is really impressive. Funding the RecycleLeague competition enables us to engage with a generation that will have a significant part to play in driving sustainability now and in the future.”

Details of all participating universities and additional information about RecycleLeague can be found here.