Our programmes and campaigns

Divestment is about challenging the ‘social license’ of fossil fuel companies – those involved with the extraction, production and processing of coal and/or tar sands and/or oil and/or gas - to operate as they currently do, whilst making space for investment in climate justice solutions, such as renewable energy. 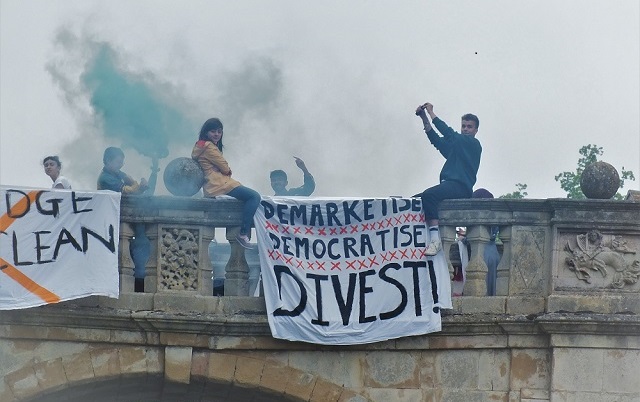 Students are pushing this agenda because the fossil fuel industry is committing indigenous and human rights abuses, whilst simultaneously playing a leading role in creating and exacerbating the climate crisis - which is racist, sexist, ableist, classist and imperialist by its very nature.

Our divestment campaign acknowledges that as students in the UK we have the power and the privilege to act. This action can take a multitude of forms – from petition-signing to direct action. It involves using our roles within our university and college communities to transform this inequitable system from the ground up, by pressuring those with decision-making power to publicly commit to severing ties with this destructive industry.

The divestment movement seeks to support and amplify the resistance to fossil fuel infrastructure that indigenous communities have been leading on for decades. From the First Nations fighting Canadian tar sands to the Movement for the Survival of the Ogoni People fighting multinationals like Royal Dutch Shell in the Niger Delta. By amplifying the voices and struggles of communities on the frontlines of both fossil fuel extraction and climate change we can fully embrace our position of privilege to push for social and climate justice globally. With those on the frontlines leading the way and shaping the narrative.

Divestment is powerful because it allows for political space to be created for material change to our energy systems and projects. Divestment also creates space to build economic and energy democracy whilst simultaneously funding the just transition to a low-carbon world - through positive reinvestment into community energy projects based in the Global South - and even on our own campuses.