The University of Liverpool to go fully fossil free!

This morning we received the below press release from Liverpool Guild of Students: the University of Liverpool are commiting to divest from all fossil fuels! This builds upon their previous commitment to partially divest - from coal and tar sands. Congratulations to all the organisers at Liverpool for their incredible work on this! 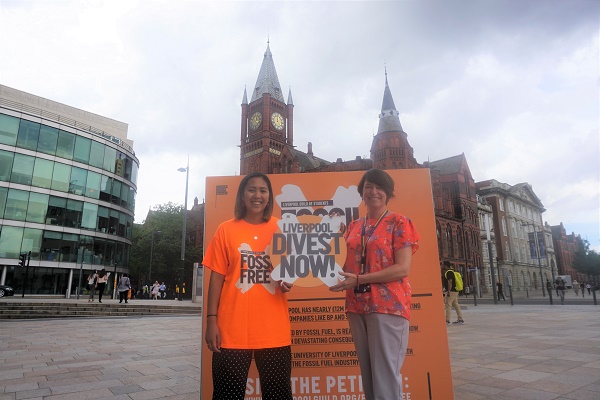 As Liverpool Council declares a climate emergency and climate strikes and Fossil Free campaigns put pressure on institutions to act, the University of Liverpool has agreed to divest from all fossil fuels.

As of 31st July 2018, the University held £9m* worth of investments in fossil fuel companies, including BP, Shell and Exxon Mobil and was ranked a 3rd Class University in People and Planet’s University League. Liverpool Guild of Students’ Fossil Free campaign team demanded that the University stop profiting off the climate crisis by selling these investments.

After a year of student activism, led by Deputy President Hannah Nguyen and teamed with local branches of organisations such as Fossil Free Merseyside and Youth Strike 4 Climate, the University of Liverpool’s Investment Sub-Committee endorsed the campaign’s demands and the decision to divest was approved by University Council in July 2019. The University has committed to sell its remaining £2.8m holdings in fossil fuel companies by July 2022.

The move to fully divest from fossil fuels builds on the University’s ethical investment policy introduced last year, a direct result of lobbying by the Guild, which committed the University to exclude companies that derive more than 10% of their revenue from thermal coal and tar sands. This exclusion will now be broadened to cover all companies with significant revenues from fossil fuel extraction.**

Hannah Nguyen, Deputy President of the Guild of Students, said: "Fossil fuel companies have repeatedly abused the human rights of communities on the frontlines of fossil fuel extraction and led us into the climate crisis we are facing. I am thrilled that the University has agreed to divest from this dirty industry.

Full divestment is a huge win for the Fossil Free movement, and it's all down to student activists at Liverpool who have campaigned tirelessly. Thank you to everyone who signed our petition, came door-knocking in halls and helped to organise the Fossil Free campaign.

I would also like to thank the NUS, People and Planet network and Fossil Free Merseyside for all their support in our campaign. The work that these organisations do as part of the wider climate justice movement is incredibly important.”

*Previous campaign materials referenced £12m of investments. This figure was taken from publically available information at the time.

**The original exclusions affected around £6.7m of the University’s investment portfolio, and the move to fully divest from fossil fuel extraction brings the total amount to be divested up to £9.5m (of which £9m relates to fossil fuels).