King's to divest after campaign of direct action and hunger strike

A lightening eight-week campaign by King’s College Climate Emergency of daring direct actions, culminating in a 14 day hunger strike and twenty-four hour occupation, has led to a significant change of policy. 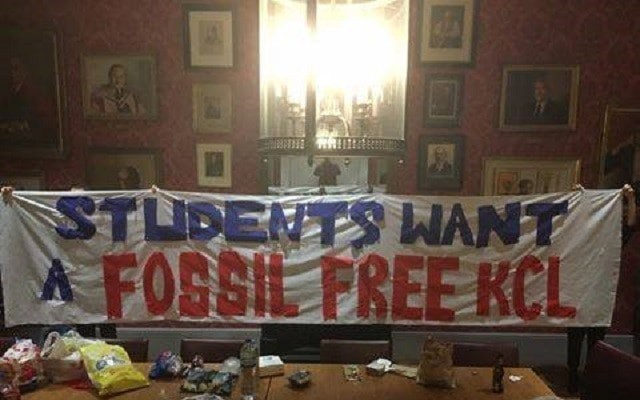 Last week, management formally agreed to divest from all fossil fuels by 2022 (see the campaign Facebook page for the full agreement). Together with a commitment to more than double its investment in green and socially advantageous technologies. Marking the end of the occupation and hunger strike, the college has boldly agreed to substantially invest in research on how cultural change can be brought about to enable the rapid transition which is required for the college and wider society. This, the campaigners agree, is integral to avoiding catastrophic changes in the world’s climate.

The ground-breaking campaign engaged in a rolling schedule of civil disobedience. Actions involved spraying chalking and painting the walls of King’s to highlight the absolute urgency of acting on climate change. The students refused to back down in the face of arrest, jail, and suspensions, as well as numerous threats of criminal damage charges and being banned from college premises. In an effort to find common ground, a series of constructive negotiations were entered into by the college, resulting in agreements to the campaign’s key demands. The most significant demand was complete divestment from all fossil fuels. The activists therefore have agreed to stop all disruptive activities, and Roger Hallam, a PhD student, has ceased his 14 day hunger strike. The activists involved would also add that while all actions planned endeavoured to be peaceful and not damage property, they sincerely apologise for any damages caused.

Activists involved in the campaign have said:

“This has been a hard fought campaign but students have stuck to their guns because this is a fight we can no longer afford to lose. My hunger strike galvanised the issue and showed we are totally serious about being out of time on climate change. The college has responded constructively and we have won a major victory. It is now time for other universities to follow King’s example.”

““We are thoroughly pleased with the result today and relieved that Roger is able to cease his hunger strike. Though I and my fellow students are extremely passionate on the subject of climate change and its encompassing issues, for many of us this was our first occupation. It is uplifting to finally get the result we were fighting for, and hope that this is the first step towards a sustainable King’s.”

College campaigners will continue to hold management to account on their agreement. They will share with other groups seeking divestment and social justice on their campus this new approach of open civil disobedience, as a means for achieving the results we need; especially in the face of the enormous threat to everyone’s lives these issues pose.