In partnership with People & Planet, NUS has developed the Fossil Fuel Declaration. By signing this, universities are affirming their current fossil free status, as well as their commitment to remaining so in the future. Has your university signed it yet? Congratulations to those that have! 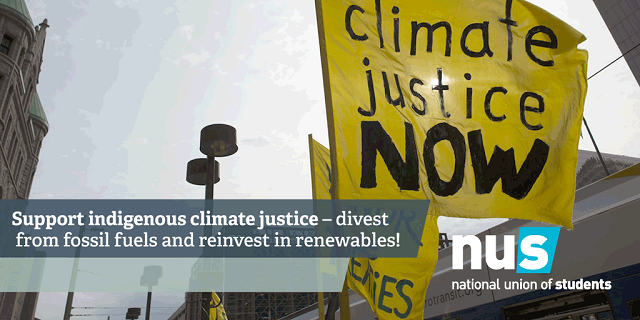 If you want to sign the Fossil Fuel Declaration please get in touch with NUS and People & Planet on: fossilfreedeclaration@peopleandplanet.org

The Fossil Fuel Declaration is part of Ask 2 of our campaign. It has been co-created with People & Planet and is for those institutions who already do not have fossil fuel investments. By affirming their current fossil free status, as well as commiting to remaining so in the future, these institutions join the global fossil fuel divestment movement.

So far, fourteen universities have signed. Is your University one of them?

If not, and you'd like to see your university amongst the names below, then here are two actions you can take:

1. Get in touch with your Finance Director and/or Vice-Chancellor to ask them to sign the declaration.

2. Set up a Fossil Free petition and start building support across your institution.

Here's the text of the declaration, with the thirteen signatories at the bottom:

The >>insert name of institution<<  has no investments in extractor fossil fuel companies, such as Royal Dutch Shell and BP, and commits to ensuring that they will be excluded from any future investments we make.

This is because we are committed to safeguarding a liveable climate for all.

In December 2015, 195 countries committed to a legally binding international commitment to keep global warming between 1.5 and 2 degrees – the first deal of its kind.

Universities exist for the public good, from conducting life-changing research to educating the global citizens and leaders of tomorrow, and they are at the forefront of climate change research. As such we think it’s important to not invest in an industry that has 5 times more reserves than it is safe to burn to stay within the parameters of 1.5 and 2 degrees of global warming.

We have students studying with us from across the world, many of whom come from communities in the Global South who are already feeling the effects of and are on the frontlines of climate change. We want to protect the future of all of our students – current and future.

We acknowledge that over a quarter of UK Higher Education institutions have thus far committed to divest from these corporations in some way and we wish to add our voice to this growing movement.

We view this decision as us embracing our role as globally significant entities and reflective of our desire to be a part of the just transition to a low-carbon economy.

We hope that many more of our fellow educational institutions will join us.

To this effect, the university declares that:

Not sure if your university is already fossil free? Check out People & Planet's Fossil Fuel Scorecards here to find out.

To sign the Fossil Fuel Declaration please get in touch with NUS and People & Planet on: fossilfreedeclaration@peopleandplanet.org