We're proud to be part of the team supporting more than 350 young delegates from 150 countries who will unite today at Mock COP26, an international youth-led climate conference, to show the world what would happen if young people were the decision-makers at COP26. 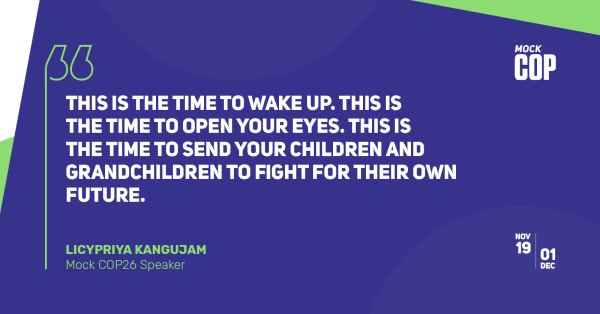 Alok Sharma, President of COP26, today joins the delegates at the conference, to highlight the important role that young people can play in the decision-making process.

“Mock COP is a fantastic initiative and I applaud the organisers' dedication and commitment to tackling climate change. As we head towards COP26 next year, this event will further demonstrate the appetite that exists across the world for governments and organisations to take ambitious climate action.”

The entirely youth-organised conference will mirror the process of the climate summit, and provide a global platform for young people to outline how they want world leaders to act. Each country’s delegation will deliver a speech sharing the concerns from young people in their country and their vision for climate action at COP26 and beyond.

“Young people were disappointed when COP26 was delayed. We are living in a climate emergency and we can’t wait a year for climate action. To fill this void, young people from across the world have decided to run our own COP, to raise ambition and drive action that can prevent further irreparable damage.”

“We are pleased that the COP26 team is engaging with our Mock COP26 and hope that it leads to conversations with other nations about the role young people can play in finding the solutions that are so urgently needed in order to tackle the climate crisis together.”

Over the next two weeks, delegates will hear from leading climate scientists, economists and health professionals, in talks that will inform the creation of the final statement outlining young people’s demands for world leaders. Nigel Topping, the High Level Climate Action Champion for COP26 will formally receive the final statement from Mock COP26 youth in the Closing Ceremony.

Environmental law charity ClientEarth is working with the students to develop a legal treaty that enables countries to adopt the Mock COP26 demands into law.

“We are supporting the Mock COP26 delegates to develop their proposition to national governments into a legal treaty. ClientEarth and I are proud to mentor and engage the future generation in the run-up to COP26. Alongside the other incredible organisations involved, we are passionate about elevating the voices of young people to demand immediate climate action.”

The two-week conference will prioritise marginalised voices and countries that are most affected by the climate crisis. Countries from the Global South have been granted more young delegates and more speaking time than developed nations, to allow them a greater say in the final statement. The majority of the keynote speakers during Mock COP26 are from non-white backgrounds.

Mock COP26 will be either live-streamed or recorded and uploaded onto Mock COP26 YouTube and fringe events will be held before, during and after the conference. People can keep up to date with Mock COP26 on Instagram, Twitter and LinkedIn, and by following the hashtags #MockCOP26 and #ForTheYouthByTheYouth.

Mock COP26 will have significantly lower emissions than COP26, as it is a virtual event. The carbon emissions of a ‘real’ COP is estimated at 59,020 tonnes of CO2, whereas MockCOP26 will produce only 39 tonnes of CO2 and this will be offset.